WHAT IS SOLAR TECHNOLOGY?

Solar technology is a type of renewable energy, it is green and sustainable. It is one of the most popular forms of renewable energy in South Africa, due to the country’s abundant solar radiation. Most areas in South Africa average more than 2500 hours of sunshine per year, and the average solar radiation level ranges between 4.5 and 6.5 kWh/m2 in a single day, according to a report by the South African Department of Energy (DoE).

The Southern African region, and in fact the whole of Africa, has sunshine all year round. The annual 24-hour solar radiation average is about 220 W/m2 for South Africa, compared with about 150 W/m2 for parts of the USA, and about 100 W/m2 for Europe and the United Kingdom, making South Africa’s solar resource one of the highest in the world.

Solar panels remain the most popular type of solar renewable energy at present because of their reliability and consistency. They produce electricity from photons, which are found in light radiation. This means even on overcast days they will produce some electricity, although they will obviously produce more electricity in direct bright sunshine. There are many manufacturers of solar panels, some of which who offer installation and maintenance options as well. While the initial cost may be a little high, the long term benefits more than makes up for this. Another key advantage is that the use of solar panels helps reduce CO2 levels. 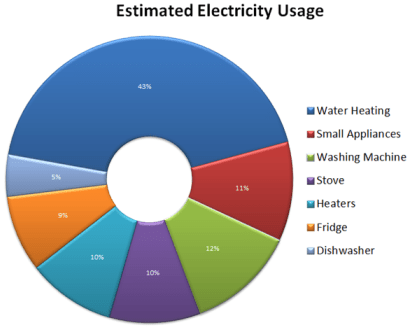 As you can see from this below, water heating accounts for most of the electricity use in a home.

South Africa faces an immense challenge to address the backlog in the construction and delivery of quality, low cost housing. While there are a number of initiatives underway, there is said to be a backlog of about 2.3 million houses. Integral to the construction of these houses is the provision of energy for basic needs. Solar technology is a cost-effective solution for providing energy to low cost houses. It enables the supply of electricity, vital for lighting and hot water.

Using a solar geyser can save you up to 40% on your water heating costs just have a look at this table below:

With our abundance of sunshine in South Africa, the solar geyser is an attractive option for homeowners and business owners looking to effectively reduce their power consumption.

THE SOLAR GEYSER – HOW IT WORKS

*PLEASE NOTE: SHOULD YOU REQUIRE ANY FURTHER INFORMATION, PLEASE DO NOT HESITATE TO CONTACT US BY CLICKING ON THE ‘CONTACT US’ TAB IN THE TOP RIGHT-HAND CORNER ON THE MAIN PAGE OF THIS WEBSITE.